A great review on the Montblanc Meisterstuck:

Here is a transcription if you want to read or can’t hear:Hey everyone it’s Matt from The Pen Habit, and I am very excited to come back with the newest addition to my pen habit, this little monster. So this is probably one of the most iconic fountain pens out there, it’s a Montblanc Meisterstuck, if I’m pronouncing that correctly, you can correct me if I’m not; Meisterstuck number one forty-nine, and I don’t know a ton about them, the way Montblanc does their numbering, but essentially I think one forty-nine means the style and size and everything.

This is an iconic pen. I happen to find this pre-owned, because I would never pay what the list price is for a new one of these, for a pen. I say that now; I might change my mind in a couple of years. But I found this pre-owned at a store in Seattle called World Lux, and really like it.

So this is the Montblanc one forty-nine, it is a pretty pen. It’s a big, big pen. So, I normally write with my pens post, but you’ll notice, unposted this thing is a monster, it’s just big. Posted it’s way too heavy to write with for me, and kind of balanced, it’s not well balanced.

Quick review of what the pen looks like, you know it’s your standard cigar-shaped pen, but very large, black, black precious resin, has gold fittings, you know, standard clip, nothing too spectacular, the tip has the white six-pointed star and from what I’ve read online this is supposed to be like a top-down view of Montblanc itself. They’ve got a triple gold band here, and right around the center band are the words Montblanc Meisterstuck one forty-nine…or number one forty-nine. And then there is another gold band here for trim.

This is a piston fill pen, so the, you know, the end screws open, and screws back closed again to fill the pen. It’s…I have ink in here now or I would demonstrate it, if I demonstrated it, it would probably end up spilling, spewing ink all over creation. But this one came with a forty-eight ten nib medium, and it’s a fourteen karat nib, and it has on the nib Montblanc five eight five; I don’t know entirely what that means, but I can show you some pictures of that so, you know it’s a standard name. It has an ink window right here, that you may or may not be able to see, I don’t have it backlit very well, but you can tell whether or not there’s ink. I’m actually nearly out of ink, so I probably need to refill this shortly.

Again very…it’s a weighty pen, this is a substantial pen that’s probably…well not probably, this is without question the largest pen I own. It verges for me right on the edge of being too big to write with, but it’s caused me to actually…I’ve been doing some handwriting exercises to try to improve my handwriting a little bit now that I’ve gotten into it, and this actually helps me because it is so big, I tend to really grasp my pen hard, and this has kind of forced me to grasp it a little bit more loosely.

The one thing that I’m not super thrilled about is, you may or may not be able to see it, right at the edge of the section here, it kind of flares back out, and I…when I hold this pen, sometimes the flared section tends to sit right on my finger, it can get a little annoying. Again it’s not a huge deal, but you know it’s just a really nice pen, writes beautifully; this is probably one of the smoothest pens I’ve ever used. So yeah, here’s the basic Montblanc one forty-nine, and we will do a writing sample next. So, here we go. 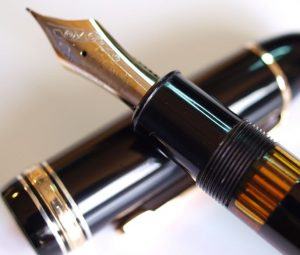 Okay, so here we are with the Montblanc one forty-nine Meisterstuck, and I’m actually not inked up anymore, I had to clean out the pen between when I recorded the intro and when I did this. So I’m going to go ahead and fill the pen now. So, I’m using a Iroshizuku kon-peki, and as I mentioned this is a piston filled pen, so basically, you just take the…take the nib, dip it in the ink, and screw it to open it up, and

I’m actually not going to fill it all the way up, I don’t need it filled all the way, but I am going to fill a little bit of the way, and screw it back closed. You’re good to go, then you just take the paper towel or a rag or whatever, and clean off the nib and the section, and we should be good to proceed. And just to be safe I’m going to cap this and put it away.Okay so let us start with the writing sample.

So this is the Montblanc one forty-nine, and this is a fourteen karat gold nib in medium, we are writing in Iroshizuku kon-peki, and of course, we are on Rhodia Dot Pad eighty grams. Okay, so as you can see this is a…this writes very, very smoothly, and for a pen that cost as much as this one does, one would hope that smoothness is certainly on the list of attributes one might expect from said pen, but this one…this one does not disappoint at all. So let’s just do a little quotation here…

Perfect with Iroshizuku ink from Pilot

Writes very nicely, and of course from gypsy, as I said I’m a musical theatre nerd, there’s just nothing you’re going to do to get that out of me. And by the way, this ink has just a beautiful shading, and I think this is probably one of the most popular inks from the Iroshizuku line from Pilot, and it’s…I can understand why. I originally thought it was too light, but the more I use it, the more I really have started to like it quite a bit.

Okay, so let’s talk line variation. So as a gold nib, one might expect that there’s a fair bit of line variation, but this nib is actually pretty stiff, you have to push pretty hard in order to get some variation. You can, but it’s not…it’s not as flexible as some others might think, and frankly I find that the amount of pressure on this nib necessary to make it flex at all, is such that it just doesn’t…it ruins the whole process of writing smoothly.

Now I may have mentioned this before in the video, I can’t remember, but I’m actually…because this nib is fourteen karat, it should…I should be able to have it adjusted by a nibmeister, so I’m thinking about having this one sent in to increase the amount of flex on the nib, I’m not sure if that’s really worth it or not. I also think I’d like to get this ground down to a fine point instead of a medium. You know I paid far, far, far less than the original price on this one, so for a used one, I wouldn’t mind paying that little extra.

In terms of smoothness, it really…this is probably the smoothest pen I own. It’s just beautiful, it’s very, very wet you can see here and don’t…don’t misconstrue the gaps in my drawing, for…or my scribbles, for…that’s just lack of hand control. But you’ll notice it’s exceptionally wet, and this ink actually dries pretty quickly, so to have that kind of wetness is a good thing.

It’s just a nice juicy happy nib, and I have never had it exhibit any problems with keeping up with me. I’d write quickly but I can’t think of things to say. I know that some people also are interested in how the pen writes upside down. You can get a very, very fine line on this pen upside down, it’s exceptionally scratchy, but if you just need a very thin…and you can’t do it side to side, it will only work if you pull the pen this way.

Obviously, my suggestion is, if you’re going to do any upside down writing, do it very, very lightly, especially on a pen like this. It’s not meant to be used that way, and you’ll notice as soon as I did that I got a little bit of skipping right there. But for the most part, I have really enjoyed this Meisterstuck one forty-nine from Montblanc.

I’m actually…because the pen is so large, I’ve found that I have needed to hold it further up the barrel than I normally hold my pens…normally I would hold my pen down here, but as I mentioned in the video, the flanch on the edge of the section, is really…can be uncomfortable for me to hold on here, and I find that I actually get smoother and more…a nicer handwriting if I hold it a little bit further down the barrel. So, I think that will do it. Thank you for watching, and stay tuned I’m sure there will be more videos coming up.